The history of Eycott Hill

During her volunteer placement at the Trust, Bangor University graduate Louise Richards looked in to the history of Eycott Hill Nature Reserve.

What’s in a name?
Eycott was originally spelt ‘Aiket’ on early maps such as the enclosure award map of 1796. ‘Aiket' is the Viking name for oak-wood. There's a cluster of places with similar names, such as Aiketgate east of Carlisle, Aikton near Wigton and Askew Rigg Farm beside Eycott Hill itself, which suggests that many parts of north Cumbria had oak-woods when the Viking settlers arrived in about 900AD. You can read more about the search for meaning in a name in this fantastic article by volunteer John Gorrill who made the Aiket – oak wood connection.

Berrier may derive from ‘Bergherge’ the Norse for ‘rock shieling on a hill’. The term shieling is mainly Scottish, originally denoting a summer dwelling on a seasonal pasture high in the hills.

An ancient past
The landscape here has been shaped by natural events over hundreds of millions of years. Remnants of the geological past are all over the nature reserve from sinkholes in the limestone, to the remains of ancient lava flows, and rocky outcrops. You can read more of the geology of Eycott Hill here.

Archaeology
A survey carried out by the Lake District National Park archaeology volunteers found evidence of pre-medieval and post-medieval settlement in the form of a number of stone enclosures, which may have been used for holding livestock. Some of these enclosures seem to have been constructed close to natural rock outcrops, an example of man working with the natural features of the land.

A more recent feature is a small ruined building under Little Eycott, mentioned by Bill Birkett in his book ‘Complete Lakeland Fells’: “… there is a tiny ruined building made from beautiful green rock. On banging a stone against the old lintel (do not damage it) note the musical chime.” He also goes on to mention a xylophone made in Victorian times from the ‘singing’ stones of Eycott Hill, however, analysis of the xylophone in Keswick Museum suggests that it’s made of rock from the Skiddaw area.

Pre-enclosure (1500s – 1796)
Before 1796 much of the land surrounding Berrier, including Eycott Hill, was common land. Farmers would have had a relatively small amount of enclosed farmland for bringing stock in for lambing but would use common land for grazing throughout most of the year. Everyone on the common had grazing and peat cutting rights.

Decisions relating to the common were made by the manorial court. Each person with rights to the common had a vote which was weighted based on the amount of enclosed land a person had. Those who had larger holdings had more say than those with smaller holdings.

Occasionally extra rules were put in place by local courts, for example rationing if peat resources were scarce. There were also local rules about behaviour; in one document it is ruled that anybody who cuts peat after midsummer and doesn’t remove it before the next lambing can be fined. In the same document it is also stated that there was a fine for those who removed peat and didn’t put back the turf. This was to prevent livestock getting stuck or injured in holes made by peat cutting.

In certain conditions you can still see the rectangular marks in the mire which show where peat allotments and roads were pre-enclosure.

Enclosure (1793 – 1796)
The Enclosure Acts were a series of United Kingdom Acts of Parliament which enclosed open fields and common land in the country, creating legal property rights to land that was previously considered common. Initiatives to enclose came either from landowners, hoping to maximise rental from their estates, or from tenant farmers anxious to improve their farms. In the area around Eycott Hill more commoners voted against The Enclosure Act but because their votes carried less weight than the larger landowners it still passed.

Enclosure improved the agricultural productivity of farms from the late 18th century by bringing more land into agricultural use. It also brought considerable change to the local landscape. Where there were once large, communal open fields, land was now hedged and fenced off, and old boundaries disappeared.

In the case of the Eycott Hill enclosure award, the Act was placed in 1795 and the award took place in 1796. This enclosure was controlled by the Greystoke estate enclosing Greystoke, Berrier, Hutton Roof and Lowend commons amounting to 3,688 acres.

There are dotted lines on the map of the enclosure, which show how the enclosure award was split up into different tenancies, however in this area not all of the boundaries were built as the Duke of Norfolk owned all the land so there was no need to physically divide the enclosures. 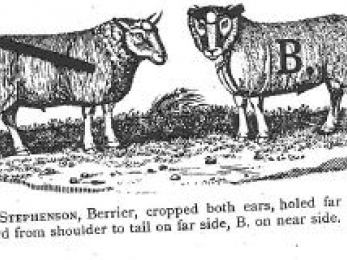 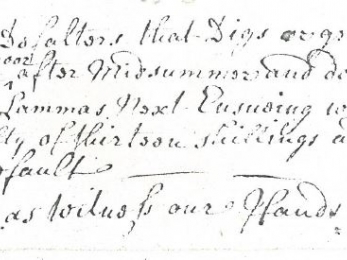 Post enclosure (1796 – Present)
Eycott Hill was used for grazing livestock until it was purchased by Cumbria Wildlife Trust in 2015. Previous landowners grazed both sheep and cattle on the land.

Sheep kept the same wool and ear markings from at least 1819 (this is the earliest record in the Shepherd’s Guide). These markings were a red B on the left side, a red line on the right side, and a hole punched out of the left ear. These markings differed across the county and allowed farmers in other areas to identify and return stray sheep. After the foot and mouth disease outbreak in 2001 stock were no longer kept on the fell so markings, except the red line, were abandoned due to the reduced risk of escape.

In 2012, the land was divided into six lots and put up for sale. The Esmèe Fairbairn Foundation bought two lots on behalf of Cumbria Wildlife Trust to allow fundraising to take place.

In April 2015 Cumbria Wildlife Trust completed the purchase and Eycott Hill Nature Reserve was opened. The land is now managed to create a mosaic of habitats for wildlife and the fell continues to be grazed by a small herd of native breed cattle owned by Newton Rigg College.

Work at Eycott Hill Nature Reserve is possible thanks to the National Lottery Heritage Fund, and support from the Heritage Lottery Fund.