Bampton Common is a 25.8 km2 common that sits above Haweswater Reservoir in the eastern Lake District. It ranges from 200 m to 802 m above sea level. There are large expanses of blanket bog on the flat tops of the common, with over 5.5 km2 having been identified.

The problem:  Most of this blanket bog is in a degraded condition, with lots of large hags and gullies as well as areas of bare peat. There is historical evidence of peat cutting. Significant peat loss has already occurred due to erosion, with the peat being relatively dry and oxidising. In heavy rain the peat is being washed into the reservoir and becks below. There is an actively eroding hag and gully system across large areas, particularly around the source of the becks. The of livestock grazing has been reduced to allow recovery of the peat once restoration work has taken place.

What Cumbria Wildlife Trust did:  Detailed surveys enabled us to accurately map all the erosion features on the common. Yorkshire Wildlife Trust flew a drone over the common to take detailed aerial photographs, and using this information we were able to produce a detailed restoration plan. This plan was used to secure government funding to address the peat erosion problem and to tender for the work with local contractors.

Using specialist excavators we re-profiled the steep eroding edges, covering them with turf taken from borrow pits nearby. Sediment traps within erosion gullies were created, allowing them to infill and stabilise. Larger bare areas were revegetated using heather brash, and seed and sediment traps to slow water where necessary.

In total we have revegetated 23,400 m2 of bare peat across the common and re-profiled 69 km of peat hags. In addition we undertook 7 km of peat bunding in order to help raise the water table and keep the peat wet.

Benefits:  Peatland restoration at this site will help reduce the amount of peat particles reaching the reservoir below. This will improve the quality of the drinking water and reduce the need for expensive pre-treatment of the water. Keeping the peat wet and on the common will also reduce carbon emissions from the site by 843 tonnes of carbon dioxide per year as well as increasing the biodiversity of the site. Surveys by the RSPB have already seen an increase in birdlife using the newly-created pools.

Carbon locked in:  1312 tonnes of carbon dioxide per year. 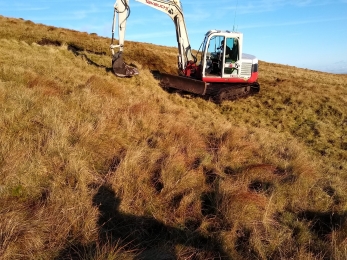 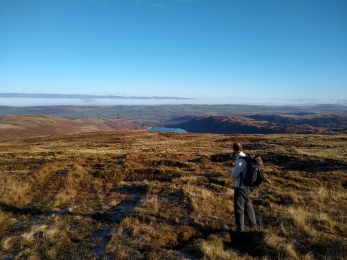 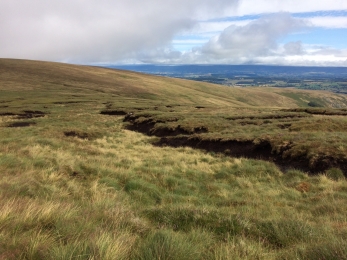 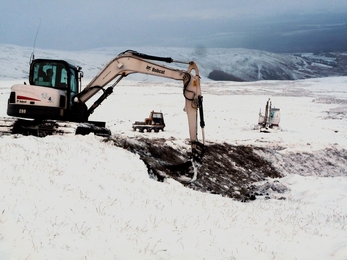