Shap Fells is an area of fell that lies in the eastern Lake District. It ranges from 300 m to 637 m above sea level. There are expanses of blanket bog found throughout the area, with over 13 km2 having been identified. Grips were blocked in 2013 and stock completely excluded but there are still many erosion features.

The problem:  Shap Fells is an area of upland blanket bog that has suffered from historic peat cutting and gripping, leading to extensive erosion. The large number of steep peat faces and areas of gullies means that the peat is slowly oxidising, and in heavy rain it is being washed into the becks below. Although grazing has been completely excluded from the area, the damage shows no signs of healing naturally and degradation will continue without mechanical interventions, due to high levels of weather exposure. There are also significant areas of bare peat amongst the hags and numerous gullies throughout this area.

What Cumbria Wildlife Trust did:  Erosion features and drains and grips were identified and digitally mapped using aerial photographs. This mapping was then checked in the field to get a detailed map of all the erosion features.  From this detailed mapping, restoration plans were developed and tender documents produced.

Using specialist machinery, over 4,000 m of gullies were blocked with a combination of peat and stone dams to prevent sediment washing away, as well as raising the water table. 14,000 m of hags were re-profiled and revegetated, of which 8,000 m also received peat bunding along the bottom to retain water. 1,400 m2 of bare peat was revegetated.
Benefits:  Peatland restoration at this site will help reduce the amount of peat particles reaching Wet Sleddale Reservoir below. This will improve the quality of the drinking water and reduce the need for expensive pre-treatment of the water. Keeping the peat wet and on the common will also reduce carbon emissions from the site by 190 tonnes of carbon dioxide per year, as well as increasing the biodiversity of the site. 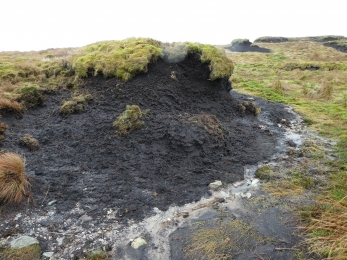 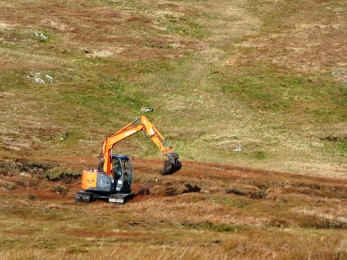 Our peatland restoration work, including on Shap Fells above, was recently awarded a £250,000 grant from the Green Recovery Challenge Fund © Cumbria Wildlife Trust 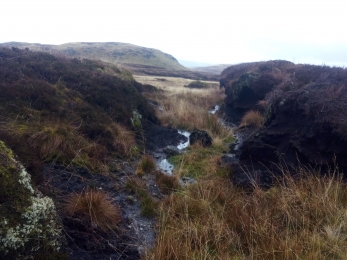