Tebay Common is a grazed upland landscape with steep grassy fells. There are three flattish areas with peat on top of the fell, at the head of Tebay Gill and Lantley Gill. The peat depths are between 0.5 m and 1.5 m, though there are many eroded areas, mostly gullies associated with historic peat cuttings.

The problem:  Tebay Common is an area of upland blanket bog.  The large number of steep peat faces and areas of gullies mean that the peat is slowly oxidising and in heavy rain it is being washed into the becks below. The bare peat and erosion gullies also means that, during high rainfall events, water moves very quickly into Tebay Gill and down towards the village of Tebay, increasing the chance of flooding.

What Cumbria Wildlife Trust did:  Erosion features and drains and grips were identified and digitally mapped using aerial photographs. This mapping was then checked in the field to get a detailed map of all the erosion features present on site.  From this detailed mapping, restoration plans were developed and tender documents produced.  We worked with Lancaster University to adapt our dam design in order to increase storage during storm events, providing greater protection from flooding for communities downstream. The effectiveness of these structures is being electronically monitored as part of Lancaster University’s Quantitative Natural Flood Management Project.

Action:  Using specialist machinery, 7,966 m of gullies were blocked with a combination of peat and timber dams to prevent sediment washing away. In addition we raised the height of the letterbox dams to create addition, water storage during storm events. 7,566 m of eroded peat was also re-profiled and revegetated to stop peat erosion. It is estimated that this work will save 41 tonnes of carbon dioxide per year being emitted into the atmosphere.

Benefits:  Revegetating areas of bare peat and blocking gullies will slow the flow of water from the site into the beck (Tebay Gill was identified as the source of flooding in Old Tebay). The additional storage built into the timber and peat dams will amplify this effect. Revegetating bare peat and raising the water table helped reduce the amount of peat particles polluting rivers below, in this case the River Lune. This has increased the amount of good quality blanket bog habitat, and it will reduce the amount of carbon dioxide being released into the atmosphere through erosion.

Species benefitting:  Peat bogs support many specialist plants and animals. While the site recovers, there will be temporary pools that benefit wildlife further. 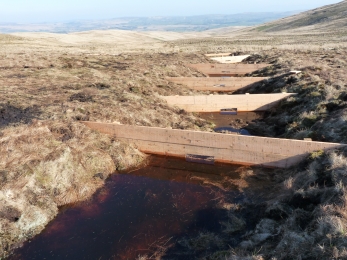 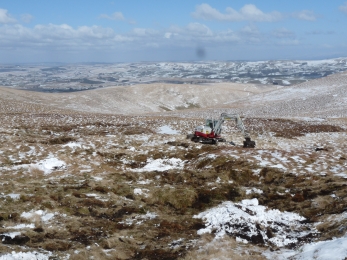 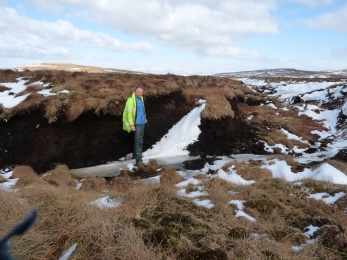 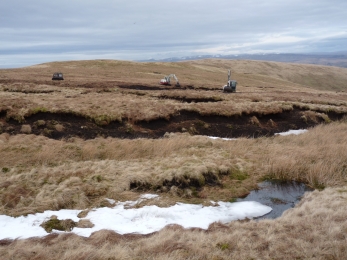