My placement by Jess Cowburn: part 2

Here is my second blog of my northern reserve student placement experience with Cumbria Wildlife Trust.

Today was the day I was in charge of the meadow survey on Eycott hill. It didn’t get off to a great start, I will admit, as I printed the wrong data collection sheet and forgot to bring clipboards for people to write on. However, after these were ironed out, we collected some good data and everything went smoothly.

I went on a 2 day course designed to help me drive a quad bike and use a trailer. This was very helpful as it helped show me both how to improve my existing experience with quad bikes as well as showing me how to perform safety checks and operate them in a safe manner. This experience also helped me gain real world experience with what could be expected of me in a job, for example, I was taught how to operate the quad with weight on it and how to reverse the quad with a trailer attached.

This was my second course of the week, this time on first aid. This was a brilliant course designed to help deal with both the situation in hand and the person involved. It had a brilliant set of steps to help the first aider; protect themselves, assess the care needed to be administered and what to say on the phone to the emergency services in order to get the correct help needed and correct response time. Primary and secondary surveys of the victim help the first aider give the correct treatment, and aid the casualties recovery time.

Today I helped the people at the Red Squirrel Project put out camera traps in order to keep tabs on known populations of Red Squirrels in Cumbria. This is particularly exciting as I spoke to Bonnie (Red Squirrels Officer) and she says that there is a known male Pine Marten that has frequently been spotted on the cameras, so fingers crossed for photos in the future.

Today was Discovery Day at Eycott hill, a family event with all kinds of activities designed to engage children with nature. The main activities were; pond dipping, moth sweeping & a nature walk. The pond dipping was a huge success for two reasons: first, the children absolutely loved it and second, we discovered that the newt population in the pond is doing incredibly well. The moth sweeping also provided us with the knowledge that the Red Admiral butterfly population is doing well too, which is brilliant news. The event also had a lady from Zoobidoo, who let me hold her African millipede and African Pygmy hedgehog. 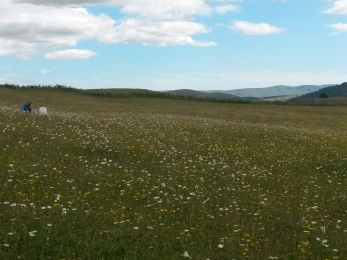 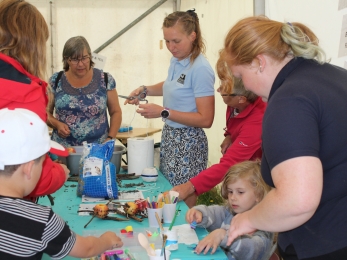 Helping out with the crafts at the Discovery Day in July 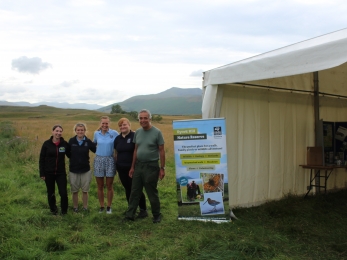 This morning I helped out with Mencap again, we did some weeding in the garden and it was very nice. In the afternoon, a lady called Gale came from Prism arts for the family event aimed at helping create things for the Cumbria Wildlife Trust & Prism Arts float for the puppet pageant in Carlisle. Gale needed my help as she needed me to finish some screen printing that Year 3 children had done on her visit to schools, as well as helping the children that came to create their own screen prints.

Today was so cool, because Kevin (Northern Reserves Officer) showed me how to use the organisations drone! He needed help to map out a river system to gain a before and after aerial photo. It looks likely I'll be doing some more drone training in the future for more projects and aspects of Kevins' work.

Afterwards I came back to Gosling Sike and helped Jody and Rob (Senior Facilities Officer) finish building the green roof for the tool shed.

Kevin and I went to Bowness on Solway in order to try and put up an electric fence around a section of the reserve, in order to help keep the conservation grazing cows on the reserve. However, when we arrived we soon discovered that we would be unable to put up a fence, and the weather was too wet to do any other jobs. So we went back to Gosling Sike and repaired some of the gates.

This morning Kevin had asked me to help put up the electric fence on the farmers side of the field at Bowness on Solway, so we packed all the gear in the pickup and set off. We got to the shops over the roundabout to buy some lunch when Kevin got a phone call to say that we no longer needed to put the fence up. So we turned round, drive back and unload the pickup.

10th September: Working on the Railroad

Today I worked at Drumbrough Moss on the board walk again with Kevin and the volunteers. Even though I got blisters on my hand from hammering away and discovered I had a hole in the bottom of my wellies as I was in the bog, I still had a good time. It’s not looking long till we may be able to finish the boardwalk.

I was supposed to do some office work today, but the power had to be turned off so that the electrics could be checked, which meant I had to spend all day out in the sunshine doing some lovely gardening with Kate the gardener and the volunteers. Such a shame… 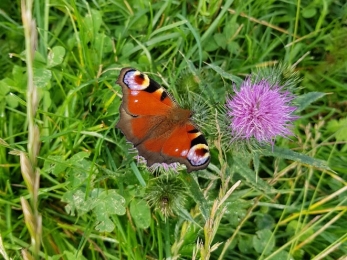 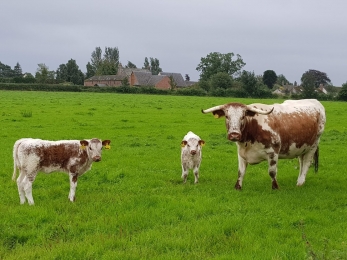 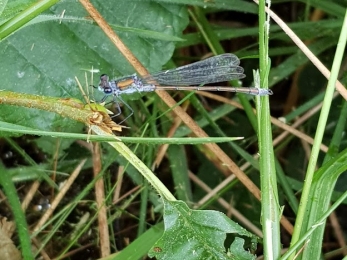 Today I helped out one of Joe’s (Senior Reserve Officer) work parties down in Kendal. We were helping clear an area in Howe Ridding Wood, which is an important breeding ground for rare butterflies. So my job, after Oscar (Southern placement student) and Joe had strimmed it, was to pick up the grass and put it onto the already existing grass piles. It was a tiring day but the view was lovely.

Today we finished the boardwalk at Drumburgh! The project has taken about 7 months to complete so it was quite a momentous occasion, one of the volunteers even brought champagne and cake. It was a very good day, so hopefully everyone can now go and explore the bog and see all its glory without getting quite as muddy as before.

Today was really fun, as I helped out Nichola and Imogen with a Halloween themed Discovery Day at Eycott Hill. This was fun as we got to go on walks looking for fungi and spiders, as well as the usual craft things and even willow weaving.

Today was the day I went on the Fungi course at Eycott. This I was the one I was looking forward to, and I was not disappointed as Paul Nichol was brilliant. I learned quite a lot about the importance of fungi in an ecosystem and the symbiotic relationships that specific fungus have with specific trees and plants. Also learning to identify the different species, this is particularly important as there are around 15,000 types of fungi in the UK including several which are deadly!

20th November: Happy Birthday to You!

The National Lottery turned 25 years old on the 19th of November, and as they are the main funders for the Eycott Hill Project we had a party to celebrate. By this I mean the Eycott Hill team & volunteers ate veggie chilli jacket potatoes and cake whilst watching the sun set at Eycott. So it was a pretty good party despite the cold!

27th November: Moooooooving on Up

Today was a cattle checking course, designed so that all the people involved on checking the cattle can keep an eye on the health and well-being of animals being used in conservation grazing. This is very handy as it allows for volunteers to check on cattle if the owner is unable to. The course was run by Ruth from the Rare Breeds Survival Trust (RBST) and she was fantastic. It's also an official course from Lantra, making that another skill to be able to add to my CV.

12th December: Have you heard my under construction joke? It’s not done yet.

Well, today I actually managed to fix a section of the boardwalk at Gosling Sike. This was just as tiring as it sounds and involved first pulling up the broken boards with a crowbar, then placing down the new boards. Finally Imogen put on the metal wiring to stop people slipping.

That's all from me till my last and final update in a few weeks time.

Thank you for reading,

Over the past few months we’ve been working with volunteers from Carlisle Mencap at our wildlife garden at Gosling Sike, Houghton, near…

Poetry inspired by the apple orchard at Gosling Sike.