One of our supporters makes a feeder sensor system to record red squirrels in his garden. Read on to find out how he got on...

Shortly after moving into our new home in Applethwaite we set up a squirrel feeder on our patio, in the hope that red squirrels would come to visit us.

Because we have a cat, we placed the feeder more for the convenience and safety of the squirrels, so it’s not directly visible from inside the house.  Fast-forward a couple of months and plenty of suggestive broken-open nut shells, but no sightings as yet. Frustrating. I decided it was time to deploy some modern technology.

I went online looking to buy some kind of wildlife sensor, only to realise I already had exactly what I needed. When we had moved in, nerdy me had installed a Hive smart hub/thermostat to control our central heating, plus some door and window sensors for security. If one of the latter could detect a door being opened, then why not a squirrel feeder!? 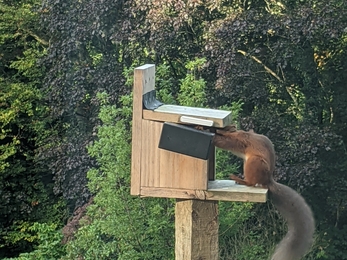 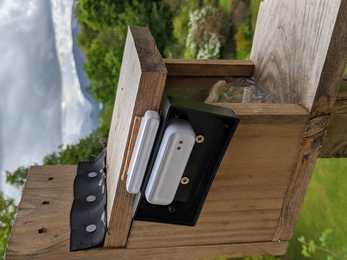 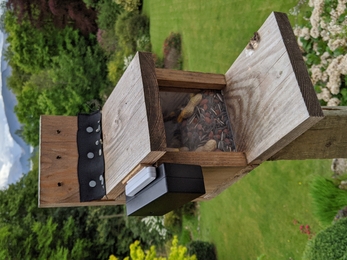 The Hive door sensor consists of two components, a dumb bit with a magnet inside and a clever bit with a battery and electronics inside. The ‘smart’ bit isn’t waterproof, so I bought a small IP67-rated plastic enclosure to protect it. These are the kind of boxes that printed circuit boards are often installed inside, and are available in a myriad of sizes. I epoxied (glued) the sensor inside, along the upper edge, making sure to leave enough room so that – if required - I can still slide it open to change the battery inside. A rare attack of foresight! The box, with its glued-in sensor, I simply screwed to the side of the feeder, after successfully testing that the thickness of the box’s plastic wall being between magnet and sensor didn’t interfere with its operation.

The next step was to attach the magnetic strip part to the lid of the squirrel feeder. Easy, I thought. I’ll use the hi-tech 3M double-sided sticky foam tabs it came with. Turned out not to be such a good idea.  Lakeland weather can be unkind (yes, really) and squirrels don’t mess about when opening the feeder to get at their beloved nuts. It soon fell off. In the end I dismantled the little magnet’s container by jemmying it open, allowing me to secure it to the lid using screws, before reassembling. Rather than epoxy it back together, making future disassembly impossible, I used a small strip of the 3M tape.

So, does it work? Definitely.

Using the Hive app I renamed the sensor ‘Squirrel Feeder’ and two days later, while eating breakfast, we had our first squirrel alert!

We dashed to the window ... and there on the feeder, tucking into a monkey nut, was Russell. Since then we’ve had three different squirrels dining with us regularly, and got some lovely pictures. As winter looms, activity on the feeder has shot up noticeably, with loads of consecutive alerts as nuts are grabbed and carried off to be buried around the garden. It’s incredible watching the energy and determination of these delightful little creatures. We’ve told them there’s no need, that we’ll keep the feeder filled with nuts, but they’re not listening!

My placement by Jess Cowburn: part 2

Here is my second blog of my northern reserve student placement experience with Cumbria Wildlife Trust.

The warm weather we had this February has caused lots of wildlife to appear earlier than it normally would.