Where are the osprey now?

A pair of ospreys, female Blue 35 and male White YW, has been breeding on Foulshaw Moss Nature Reserve since 2014.
As excitement mounts ahead of their return, there are a couple of questions that we often get asked about our lovely osprey – where are they now and how do we know they’ll be back?

After the chicks fledged last year we watched as our osprey followed the standard pattern for departure – mum heads off first, then the chicks and then dad follows behind. They may have been a very tight knit little group during the breeding season, but once that’s done with they become rather more solitary and don’t tend to travel together, but it would seem that dad hangs around just to make sure all the chicks are safely on their way.

Where do they go?

They generally head down to the coastal wetlands of West Africa to places such as Gambia and Senegal and we know from the ringed birds that have been tracked that they are very loyal to the same spot, usually even going back to the same tree year after year.

In their winter habitats they will mix with other osprey from around Europe who also head south for season and they tend to more tolerant of other osprey nearby with 20 or more found roosting on one beach in Senegal. This is most likely because when they are in the UK they have a greater need for food in order to feed their chicks, and sustain themselves while they hunt for a growing family, rather than just looking out for themselves as they do during the winter months.

While we’re still far from fully understanding all of the mysteries of bird migration, it’s most likely that the migration of the osprey is driven by food. Though it’s less common these days for rivers to freeze in the UK, the fish in them still move down to lower levels as the water temperature drops, making it much harder for the osprey to find sufficient food.

So why not stay in Africa?

Well we think that’s because the hours of daylight don’t change there, whereas in the UK we have lovely long summer days, allowing much more time for the osprey to hunt and gather the food they need for their hungry chicks from local rivers and nearby Morecambe Bay.

And how do we know they’ll be back?

Well in the same way that they tend to migrate to the same tree in Africa for the winter, they are creatures of habit and return to the same nest back home year after year. They don’t mate for life as such, but the same pair usually finds their way back to the same nest each year.

Of course they face a huge number of challenges during their migration – many people are aware of the risk of them getting shot as they cross Europe, but the sad reality is that they’re at no greater risk of getting shot there than they are in Britain.

Crossing the Sahara is one of the biggest challenges they face where sandstorms can disrupt their journey and throw them off course. They often need to roost on the ground during this stretch of their journey leaving them vulnerable to predators such as wild dogs and they need to keep their wits about them when they eventually arrive at their winter roost where there has been more than one story of an osprey being caught by a crocodile as it swoops into the water to pick up a fish.

We know some osprey only ever go as far as southern Spain and many osprey experts will tell you they’re not sure why that is – our theory is it’s because they’ve heard about the sandstorms, dogs and crocodiles further south...

Next time on osprey watch we'll tell you everything you need to know about how to spot an osprey.

WE STILL NEED YOUR HELP!  Last year we had a camera on the nest which sent back photos every six hours but it wasn’t very reliable, and though we got some good pictures, a lot of them were poor quality. We had an eye on the nest from a security point of view but it was hit and miss because of this. This year we’re hoping to improve things with a better camera to enable us to live stream footage from the nest – please help us achieve this by supporting our osprey live web cam appeal.  Thank you. 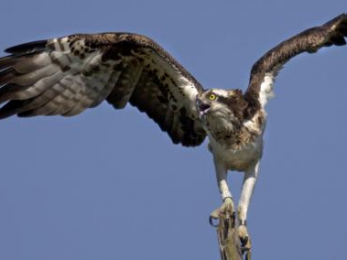 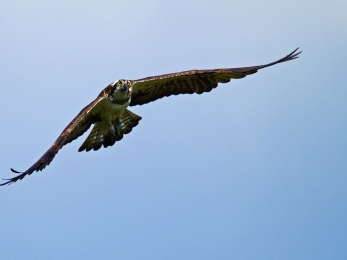 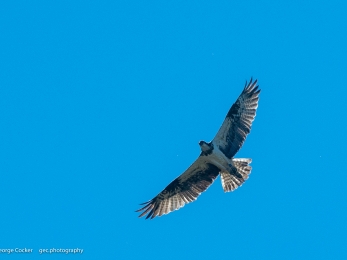 Yan and Tan are now known as 410 and 411 (officially at least). Alasdair McKee explains why ringing the osprey chicks is so important…

Family dynamics in the osprey nest

As the osprey chicks grow and get more boisterous, Alasdair McKee describes how Blue 35 sometimes needs to find some 'alone time…