My placement so far...

So it’s now November which means I’ve been working for Cumbria Wildlife Trust for 4 months and it’s crazy how quickly it has gone. It’s certainly been a busy few months filled with many different reserve jobs, courses, and activities, and with all this excitement, even with a blog schedule, I haven’t managed to update you with how things have been going so here goes.

My time over the past few months has been filled with doing jobs at the various conservation days; many of them at Eycott Hill. One of these conservation days was spent crawling around in the mud plug-planting 1300 plants next to the scrapes that have just been created along Naddles Beck. Although, we decided that certain places were just too wet after walking across and almost sinking to above our knees in the mud. We avoided these parts to stop any more of us nearly getting stuck and losing a welly! We also had a day knocking in the marker posts as the cows have been using them as scratching posts meaning many of them were a bit wobbly. Knocking them in was harder than it looked and we had fun guessing what angle they were going to end up at. 3 of the work parties were spent weeding the tree tubes of the many trees that have been planted by pulling out the 5 foot high grass from the tubes to reveal a little sapling that was ready to pop out of the tube now the grass was no longer shading it.

After the fantastic botany and species courses of sedges, grasses, moths and flowers I attended at Eycott Hill, I was keen to go on some more courses so when I heard about the dry stone walling course I was excited to go on it. I’m always amazed at how the walls can stop up for hundreds of years with the Cumbrian wind and rain battering them all year round. It was a great couple of days taking down a battered section of wall at Eycott and rebuilding it under the fantastic guidance of our teacher Andrew from the Dry Stone Walling Association. I think it will definitely take some practice though as there was lots of turning of stones and removing and replacing and then going for another completely different stone to fit into the gap it needed to go into; only for Andrew to come along and find the perfect stone to fit or manage to place the stone I had been twisting for 5 minutes in the gap perfectly.

Another course I attended was an outdoor first aid course run by First Aid Academy where we learnt how to help in emergency situations. Learning how to splint broken bones and perform CPR etc. was interesting and I’ll be able to sort you out if anything does unfortunately go wrong on the reserves!

Lots of events have been happening at Eycott Hill and I have been enjoying getting involved organising and running them. Over half term we had our spooky family Discovery Day where all the children got stuck into identifying the fungi as well as discovering the tricksters and treaters we have on the reserve. We decided that the cuckoo, short eared owl and sundew plants are definitely tricksters while the luing cattle, sphagnum and ash tree are definitely treaters! After finding all the tricksters and treaters we had a quick scary true or false spider game and I had a group of very knowledgeable children who got nearly all of my questions right; my personal favourite being that baby spiders are called spiderlings!

We also had a dark skies festival at Eycott Hill and I helped to run a nocturnal wildlife walk on the Friday evening where we all grabbed our torches and went out onto Eycott in the dark to see what different wildlife comes out at night. We stopped for a little bit at the badger sett to see if they would come out but they must have been having a lie in as they didn’t appear even though we had seen them appear at the same time during the previous week on the trail cameras. We did see a bat fly over our heads though and decided it was too big to be a pipistrelle so we turned our bat detectors down to a lower frequency and heard a noctule bat which was very exciting! 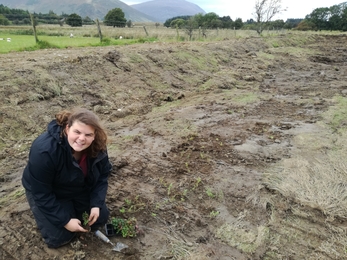 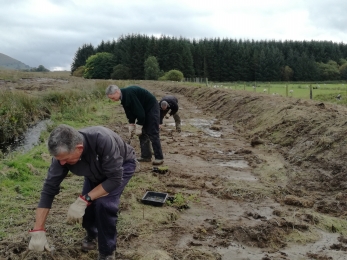 I have also spent a day with the Red Squirrel Northern England team going out and putting up trail cameras in Northern Cumbria which was really interesting. I managed not to not get lost by learning how to use a GPS properly, although we did have to return to the car at one point after getting 100m down the track before realising we hadn’t picked up the second camera for that site!

I’m definitely busy over the next few months and have a lot more conservation days coming up, not only at Eycott but also at some new reserves which I’ve not been to yet like Orton Moss which I'm looking forward to! I’ll be doing more work with the Red Squirrel Northern England project by analysing the footage from the cameras I set out and pictures that other volunteers have sent in. I’ll also be kept busy with the Eycott Hill project over the autumn and winter helping with event and activity planning, data analysis, and report writing.

Work at Eycott Hill Nature Reserve is possible thanks to National Lottery Players, and support from the Heritage Lottery Fund.

Summer at Eycott by Oscar Adams

Over the summer I have become a little more acquainted with Eycott’s most prominent inhabitant, the Belted Galloways.