My name is Jenny and I have just finished my second year at Durham University studying Biological Sciences. I am doing a summer placement with Cumbria Wildlife Trust, based at Eycott Hill Nature Reserve.

A BioBlitz is an event with the aim of recording as many species in an area as possible, with the help of the public, and so far during my placement I have taken part in two unique BioBlitz events…

The Bowkerstead Farm BioBlitz, organised by Rusland Horizons, was a 24 hour event, focused around surveying wildlife in the area. Bowkerstead Farm and the surrounding areas were of interest, because only 22 species had previously been recorded on the database.

During the set-up on Saturday, experts from all over Cumbria arrived and scouted out the best spots for their traps and cameras. The official public event ran from 4pm on Saturday to 4pm on Sunday, with families dropping in to investigate the different activities. On the Saturday evening, there was a live performance by the Boom Bike Bourreé, specialising in medieval hip-hop, which created a fun, enthusiastic atmosphere across the BioBlitz site. After the music, a group of around 50 set off on an evening bat-walk. It was also time for the mammal, moth and newt traps to be put into place, before returning to our tents to try and catch a few hours of sleep.

Sunrise on Sunday (5am) saw a couple of very keen volunteers and local moth expert/enthusiast, Guy Broome, collect the 5 moth traps set out in different habitats across the site. Upon bringing the traps back, there were some young moth enthusiasts waiting to see which species had been collected. Guy carefully recorded all of the species present and kept some moths on pieces of wood to be passed around for guests to look at. As morning continued, the mammal and newt traps were collected, however both were unsuccessful. After refuelling with breakfast, it was time for a day of hourly activities to begin, including tarn dipping, insect walks, lichen and plant informative sessions and amazing sound walks which allowed you to hear the wildlife like never before!  Alongside the wildlife exploring there was a craft barn set up for people that wanted to learn new skills but escape from the sun. They used recyclable materials to create headbands, giant dragonflies and more…

As Sunday drew to a close, the list of species found across the site grew as surveys were handed in. It was clear that the team effort of the experts, volunteers and the public meant a great amount of new species had been found and recorded in the area.  After the weekend, there was a total addition of 390 species to the records, with more to be added after expert identification.

The Eycott Hill BioBiltz ran across one day and focused on the insects present across the nature reserve. Eycott Hill Nature Reserve is already well recorded with more than 700 different species, so the focus of this event was to encourage families to get more involved with wildlife and try recording. 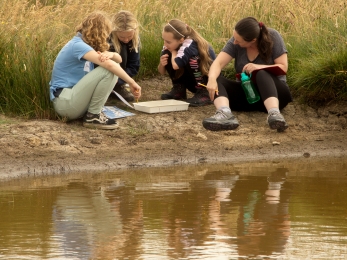 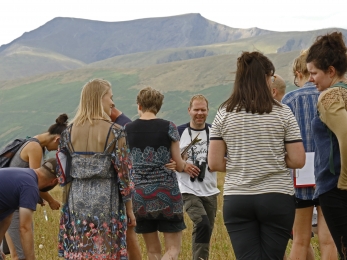 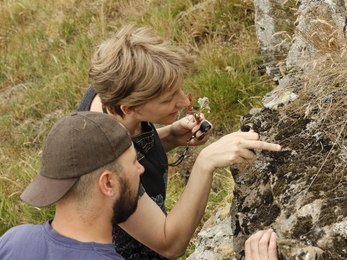 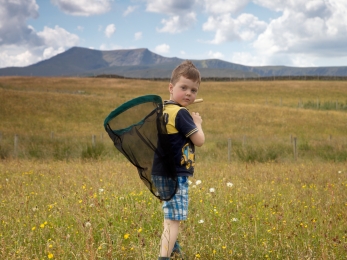 Like the previous weekend, moth traps were collected and recorded, with some being kept for public viewing. It was fantastic to see children learning about the different moths and holding them. We found 29 moths species that hadn’t been recorded at Eycott Hill before!  We also learnt how certain moth species, such as the narrow winged pug, indicate certain habitat conditions, so it is useful to record these as species of interest to be used as comparisons in future.

The day mostly involved pond dipping, a lichen walk, and learning about bees. During the bee walk, the public were taught and encouraged to catch the bees in glass tubes and identify the different species through stripe patterns on their back using guides. Another new record for the nature reserve was the bilberry bumblebee (Bombus monticola) which likes moorland habitats. We were also taught about the importance of different flowers, in particular how bees recognise where the pollen is using UV vision and special markings on the flowers. Children engaged in butterfly catching, running through the hay meadows with nets, and identifying the different aquatic life present in the ponds. At the end of the day, the records were collected and are currently being added to the Eycott Hill species list. 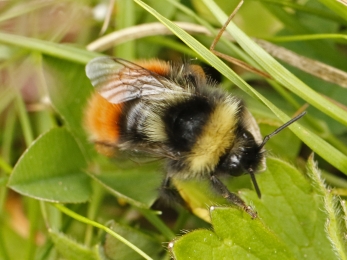 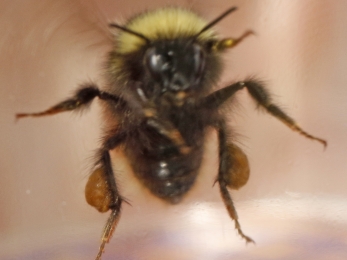 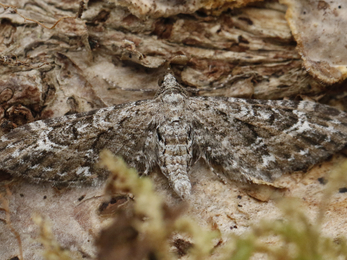 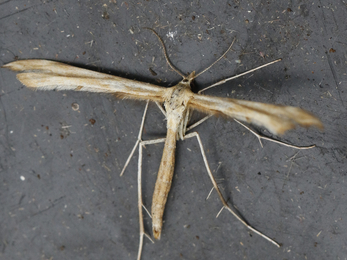 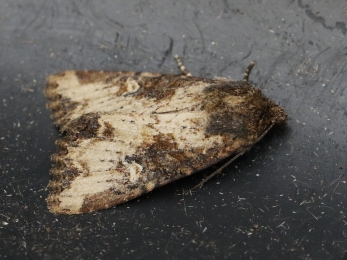 From a personal perspective, the two BioBlitz experiences have taught me so much about the local wildlife just on my doorstep, as well as how to get involved with surveying the different species, and how to help them by knowing which plants are important. BioBlitz events provide an excellent opportunity to meet local experts, other wildlife volunteers, and engage with all ages of the public. They also spread awareness of how fundamental biodiversity is to any area, and the importance of working towards maintaining and increasing biodiversity.

Work at Eycott Hill Nature Reserve is possible thanks to National Lottery Players, and support from the Heritage Lottery Fund.

Summer at Eycott by Oscar Adams

Over the summer I have become a little more acquainted with Eycott’s most prominent inhabitant, the Belted Galloways.