Visitors to get an even better experience at Foulshaw Moss

Benches, kid’s explorer backpacks, and a printed visitor guide are all new features planned for South Cumbria’s biggest nature reserve, thanks to a grant from Tarmac Limited Landfill Communities Fund.

Cumbria Wildlife Trust has been awarded £17,397 to help visitors have an even better experience at Foulshaw Moss Nature Reserve. Three benches will be installed at key viewing points: the osprey platform, raised viewing tower and the dragonfly ponds platform, and a picnic bench will be installed near a new bird feeding and viewing area.

Paul Waterhouse, Southern Reserves Officer for Cumbria Wildlife Trust says: “These new visitor facilities will make for an even more enjoyable experience for visitors to Foulshaw Moss Nature Reserve. The new benches will enable people to sit and enjoy this special place for longer. The visitor guide will explain why Foulshaw Moss is so special and what wildlife can be seen there.”

People will also be able to understand more about the wildlife at the nature reserve thanks to 15 new explorer backpacks for young visitors complete with spotter sheets, binoculars, bug viewers and simple ID.

The grant from Tarmac Limited Landfill Communities Fund will also fund the removal of 12-15 hectares of rhododendron and western hemlock from the site.

Paul continues: “Since the completion of the restoration of Foulshaw Moss in 2014, invasive rhodedendron and western hemlock have been establishing on the moss.  In order to protect the habitat in it best condition for wildlife, we need to remove the invasive species creeping on to the periphery of moss to prevent it taking hold.”

In terms of scale, rarity of habitat and diversity of species, it doesn’t get better than the stunning Foulshaw Moss Nature Reserve.  Foulshaw is the result of an impressive 15-year restoration, which has transformed the site to create this haven for wildlife.  It is also one of just a handful of sites in England where osprey can be viewed easily.

Foulshaw Moss Nature Reserve, Site of Special Scientific Interest and Special Area of Conservation is a 350 hectare lowland raised mire that has been restored by Cumbria Wildlife Trust following destruction caused by conifer planting, drainage and peat cutting.  Ospreys have bred on Foulshaw Moss for the past four years, which has led to this site becoming one of our flagship sites attracting over 10,000 visitors a year.  Each season has seen improvements to the site for the visiting public with new boardwalks, interpretation about the site and its wildlife, and an osprey viewing platform.

Why not visit this stunning nature reserve? 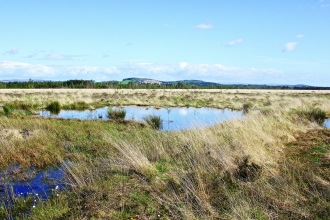 Ospreys use Foulshaw Moss Nature Reserve as a nesting site. To visit for free see the directions below.

A pair of breeding ospreys has returned to our South Lakeland nature reserve, prompting hopes that osprey chicks will hatch here for the…