This Bird of Prey blog is an in-depth look at the identification of five commonly seen birds of prey, including information on flight style and where they’re likely to be seen.

Few birds inspire awe as often as birds of prey, those athletic aerial predators that rule the roost when it comes to avian (bird) food chains.

People traipse cross-country to see clouds of kites, or to catch a glimpse of a golden eagle in its highland home, and webcams fixed on the nests of ospreys, owls and peregrine falcons draw huge numbers of viewers every year.

But you don’t have to travel far to see many of our more common species. Some can be seen in parks and gardens, or even found amongst the glass and steel of city centres. 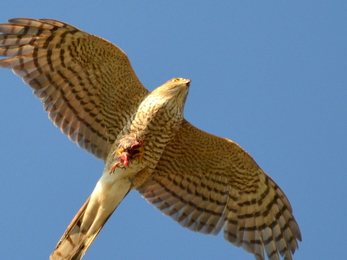 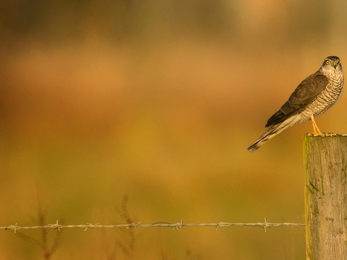 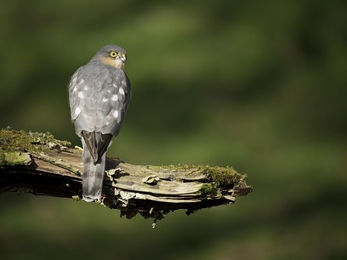 This is the bird of prey you’re most likely to see in your garden, and probably the one here at The Wildlife Trusts’ we’re most frequently asked to identify.

Sparrowhawks are fairly small compared to many other UK birds of prey, with the largest females roughly the length of a woodpigeon, whilst males are smaller.

They have grey backs (brown in young birds) and a barred breast, belly and underwing – grey barring in females and orange in males, which also have an orange flush to the cheeks.

Their legs are slender and yellow, and they have fierce orange-yellow eyes.

In flight, they show short, broad and fairly blunt-tipped wings and a long, square-ended tail – longer than the width of the wing.

They usually fly with a flap-flap-glide motion, with a few rapid wingbeats followed by a short glide. Sparrowhawks hunt smaller birds with surprise attacks, often flying fast and low through bushes and around buildings to catch their prey unawares.

As well as gardens, they can be seen in parks, forests and other areas with some tree cover.

Sparrowhawks are often confused with goshawks, which are larger and much rarer. The size difference isn’t always obvious on lone birds, but goshawks have much thicker legs, bulkier bodies and in flight show slower wingbeats, a rounded tail and more protruding head.

It’s extremely unlikely for a goshawk to turn up in a garden; most views are distant birds over large areas of woodland, which can be hard to identify without experience. 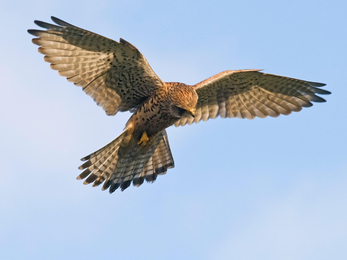 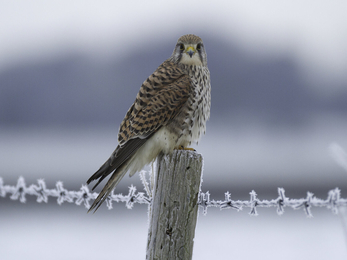 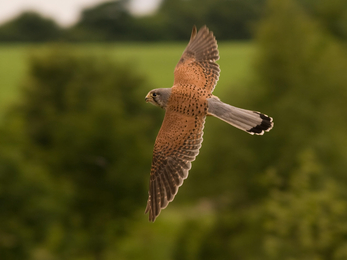 A common sight along roadsides and over farms, grasslands, and other open areas, kestrels are usually easily recognised by their habit of hovering on the spot.

They seem to defy physics as they hang in the air, tail spread out like a fan, wings fluttering but their head fixed in place as they scan for small mammals on the ground below.

Kestrels are a similar length to a sparrowhawk but with longer wings, and they glide less frequently.

Their reddish-brown backs are speckled with black spots and their buffy breasts and bellies have rows of bold, black spots running down them, unlike the horizontal bars of a sparrowhawk.

Males have a blueish head and females have a brown head, but both have a dark moustache-like strip running down from the base of the beak. 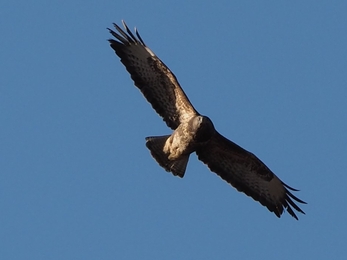 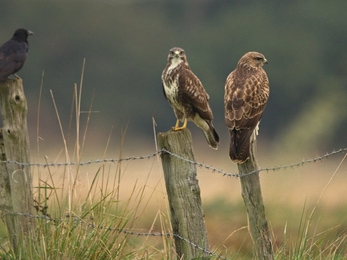 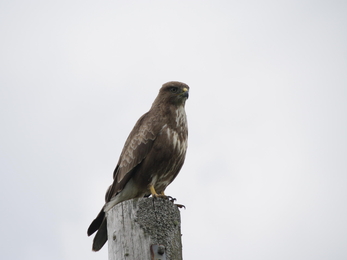 Buzzards are another bird regularly seen along roadsides, often perched on posts or in trees. On warm days they can be see soaring high in the sky, flying in lazy circles on stiff wings.

Numbers of buzzards declined dramatically following years of poisoning and persecution, but happily the population has since recovered and buzzards are now our most common bird of prey.

Their plumage is incredibly variable, ranging from dark brown all over to almost white on the underside. They usually have a pale band across the lower breast, between the darker upper breast and belly sides.

In flight they appear broad-winged with a short, broad tail. They’re most often seen soaring quite high in the sky, with the tail spread like a fan and the wings stiff, rarely flapping, as they glide in wide circles.

Because size can be so hard to judge on a flying bird, soaring buzzards are sometimes mistaken for the much larger eagles, but golden eagles are less compact, with longer wings and tail; and white-tailed eagles are front-heavy, with a huge beak and a short tail, as well as having huge wings – they’re often described as flying barn doors!

You’re unlikely to see eagles away from northern and northwest Scotland, or near one of the more recent white-tailed eagle reintroduction sites. 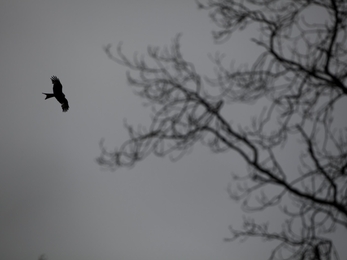 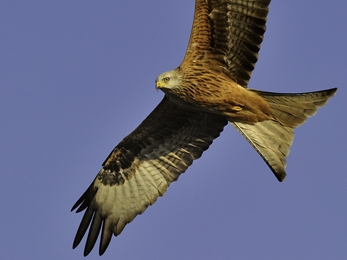 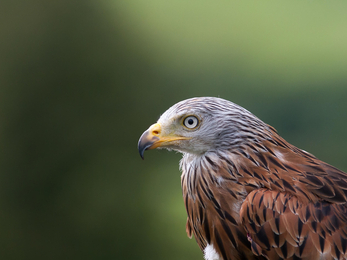 Red kites were once driven to extinction in most of the UK, with just a few birds hanging on in mid-Wales by the early 1900s.

Following several reintroduction projects and greater protections afforded to them, red kites have now spread across Wales and returned to England, Scotland and Northern Ireland.

In some places, they are one of the most commonly seen birds of prey. They scavenge for much of their food, so can often be seen flying over roads searching out roadkill – the unlucky victim becoming the red kites version of ‘fast food’.

They’re very distinctive birds, larger than a buzzard, with a mostly rich red-brown plumage with a paler head and a large, black-tipped yellow beak.

In flight they show long, narrow wings with five clear ‘fingers’ of longer feathers at the tips. The undersides of their wings have a prominent pale patch just before the black tips.

They have a very long, deeply forked tail that makes them instantly recognisable, which is regularly twisted from side to side as they fly. 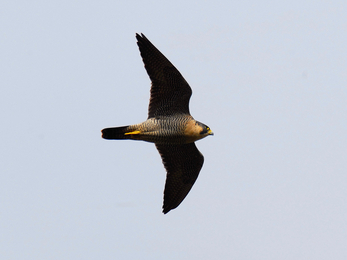 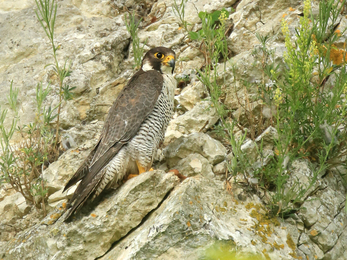 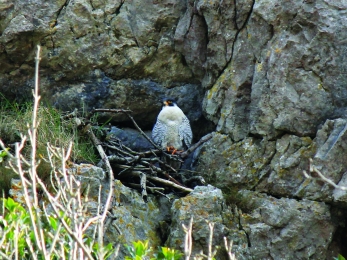 Peregrine falcons have moved into many of our cities, hunting pigeons and even parakeets: the ledges of tall buildings filling the role of the cliffsides they would normally nest on.

Away from urban areas, they nest in rocky places including coasts and quarries.

Peregrines are heavily built but a little smaller than a buzzard, with a dark back that reaches up onto the head to form a hood, with a broad ‘moustache’ stripe extending from the base of the beak on each side.

They have a white throat, cheeks, and underparts, with dark barring across the breast and belly. Young birds are buff-white below, with dark vertical streaks instead of barring.

In flight they cut a sharp silhouette, with pointed wings that are usually slightly flexed backwards, creating an angle in the leading edge. They look powerful and chest-heavy, flying with fast, shallow wingbeats.

When they spot prey, they put on a burst of speed and often hunt by diving down ontheir quarry from above. This behaviour is known as stooping, and the falcons can reach speeds of around 200 miles per hour.

Which one of these birds of prey is your favourite and why? Comment below!