Meathop Moss Nature Reserve is a large area of lowland raised mire and other wetland habitats located directly adjacent to the peatland.

The problem:  The peatland has been eaten away by peripheral domestic peat cutting, agricultural claim and drainage but does still retain an intact uncut dome of peat. Historically, Meathop Moss was mainly open landscape. However, it experienced a gradual change from open peatland to conifer woodland. Historical peat cutting, drainage and tree growth led to unstable and lowered water levels across the peatland, particularly at their edges. Water table data suggested that water levels were too low and fluctuated widely throughout the year. Dry conditions extended over large areas, particularly during the drier summer months.

What Cumbria Wildlife Trust did:  Meathop Moss first became a nature reserve in 1920 and was purchased in 1999. Volunteers kept the central part of the peatland free of trees over many years. Drains were blocked in the open central area and rhododendron, birch and pine were removed every year. In 2010, 340,000 m2 of conifers were removed from the periphery of Meathop Moss, 3,418 m of peat cut edges were reprofiled and 72,000 m2 of ditches were blocked or bunded. 142,200 m2 of fen habitat were also created.

Benefits:  Removing trees and blocking drains and ditches has raised the water level of the peatland. Seasonal fluctuations are no longer causing it to degrade and release carbon dioxide into the atmosphere. Over time, as the peatland recovers, it will begin to cover in sphagnum moss, which will take in carbon dioxide as it degrades very slowly and forms peat.

Carbon locked in:  1,228 tonnes of carbon dioxide per year.*

*Figures are calculated using government methodology for estimating carbon dioxide loss from damaged peatlands. Figures for restoring from forestry are not available, therefore restoration from grassland is used as proxy. 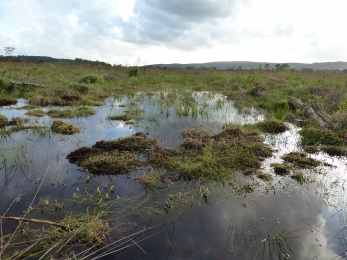 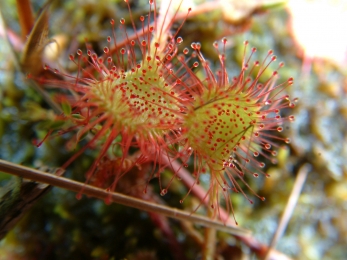 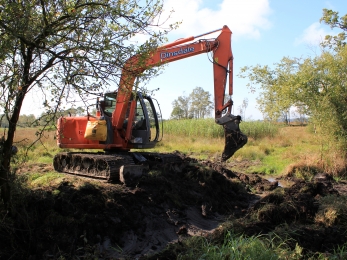