Matterdale Common restoration area consists of two small adjacent fenced areas of blanket bog totalling 101,700 m2. They were fenced in 2010 to exclude livestock because of badly eroding hags and gullies. They have partly revegetated, but we need to tackle significant remaining areas of bare eroding peat, mainly around big gullies. The peat depths are generally over 1 m deep with significant areas over 2 m deep.

The problem:  There are records of domestic peat cutting rights in Matterdale dating back to the 1200s. Marker stones, as well as the straight edges and corners of many of the eroding peat hags, strongly indicate that past erosion was caused by this human activity. Grazing has removed heather from 57 per cent of surveyed areas and 49 per cent had less than six peatland indicator species. Sphagnum mosses were patchy rather than forming continuous carpets, and many of the big moss hummocks have no sphagnum moss in them. Also found were four areas of what appears to be significant natural erosion in steep peaty flushes, quite probably related to Storm Desmond in 2015. Large blocks of peat up to the size of a car have been washed up to 400 m downslope. The two restoration areas of bare peat were so significant that they had been fenced off to exclude livestock. However, water movement across the area was preventing any natural revegetation of the peat.

What Cumbria Wildlife Trust did:  Site visits were undertaken in order to map the large numbers of eroding linear faces (likely to be old peat banks used to provide peat bricks for domestic fuel). Locations and directions of gullies were also mapped, as well as water movement across the site. These surveys enabled us to develop detailed restoration plans for one of the most degraded areas of peat we have had to work on so far.

A variety of different techniques were used to restore the steeper hags and gullies. Hags that were too steep to vegetate naturally were re-profiled using machinery. This is done by rolling back 2 m of vegetation from the top of the hag then compacting the peat underneath to a slope at 30°, then replacing the vegetation over the re-profiled peat slope. To reduce the water flow through gullies and over bare peat, small dams will be created to help trap water and spread it out across the bog surface using wood, heather bales or, where possible, peat. We will also speed up the revegetation of the bare peat areas by spreading locally-sourced heather brash and sphagnum moss. This can be harvested from nearby and then spread over the bare peat using machinery.

A total of 3,269 m of hags and gully faces were re-profiled. Wooden dams, spaced every 7.5 m were used to block 2,304 m of gullies, with heather bale dams used on 1,282 m of gullies. Peat dams were used to block 477 m of eroding gullies. 30,000 m2 of bare peat were covered in heather brash and/or grass seed to quicken revegetation. 1,800 clumps of sphagnum moss were planted in bare peat, along with 3,000 cottongrass plants.

Benefits:  The aim of these works is to increase the rate at which the peat recovers, by improving the hydrology and the vegetation cover of the area. This will enable the fences to be taken down earlier  than if the erosion is left as it currently is. Revegetating bare peat will reduce the amount of peat particles polluting the internationally important River Derwent, and it will reduce the amount of carbon dioxide being released into the atmosphere through erosion. Revegetating areas of bare peat and blocking gullies will slow the flow of water from the site, reducing the chance of flash flooding downstream. Raising the water table and making the site wetter will also help a host of rare species that need wet peatlands in which to flourish.

Benefitting species:  This is one of only two Lake District locations with records of hairy stonecrop, a scarce plant of bare wet stony ground, which may actually be dependent on these conditions.

Carbon locked in:  60.53 tonnes of carbon dioxide per year. 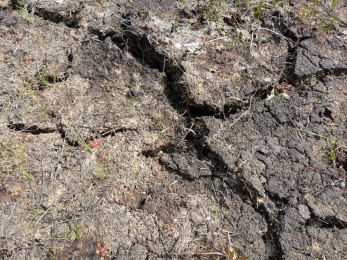 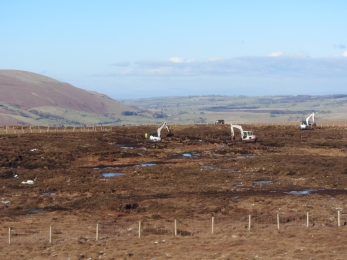 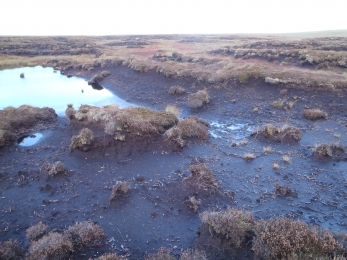